The 463 area code entered service on March 15, 2016, as an overlay of the 317 area code that was already assigned to the Indianapolis area. More than two years later, Sprint still doesn’t offer 463 phone numbers.

The Indiana Regulatory Commission announced that area code 463 would be added in 2016 as an overlay. The new area code, which coincidentally also spells out IND on a standard telephone keypad. 463 entered service on March 15, 2016. On that date, a permissive dialing period began during which both seven- and ten-digit calls would be able to complete. Ten-digit dialing was originally to become mandatory in the Indianapolis area on September 15, 2016. However, on August 31, in response to an appeal from security alarm companies, the deadline was extended to October 15, 2016. Indianapolis had been one of the few major cities where seven-digit dialing was still possible.

Two helpful PowerShell functions to help you check who is logged on remotely and to remotely log them off.

This Get-LoggedOnUser will use Get-WmiObject to tell you who is logged on to a remote computer. You may use a comma-delimited list of computer names.

This LogOff-LoggedOnUser function will use Get-WmiObject to log off a user. You may use a comma-delimited list of computer names.

When you visit www.ticketmaster.com you might notice in the footer a statement that says “By continuing past this page, you agree to our Terms of Use.”

In order for a Ticketmaster customer to read either their Terms of Use or their Privacy Policy, they would have to blindly agree to both before reading them.

It appears that if you want to use Ticketmaster.com and first visited any page other than the Terms of Use page, you’ll have to agree to their terms before reading them.

I received an unpleasant solicitation from Ryan Tello today, the Vice President of Client Development for Rydek Professional Staffing out of Corona, California.

The unwanted phone call began as normal. Ryan gave a two- to four-minute pitch introducing himself, his company, and service. While these unwanted solicitations are tiresome and ignore my publicly posted request for privacy; Ryan Tello was both normal and polite during the early stages of the call.

I responded by saying “No thank you;” but Ryan wasn’t ready to give up and began asking for reasons why. When I said “Honestly, I avoid doing business with companies that perform cold calls and cold emails (as stated in my Privacy Policy),” he became upset and reacted poorly.

Ryan started with the typical “How will you learn about my product or service?” and similar questions already addressed in my Do Not Solicit FAQ. He then wanted to know my job title and responsibilities, which I replied, “I’m sorry, we do not discuss job titles, responsibilities, or system infrastructure with unsolicited callers.”

My reason is that there is no easy way to distinguish a sales call from a social engineering attack — both are initiated by the potential bad actor and both are an attempt to learn more about a company, individual, system, or process.

That’s when Ryan Tello began his ad hominem attack, stating that I must be a terrible person to work for. I asked him to please don’t call again. He said that he would keep calling — often — and will keep asking for different employees until someone speaks with him.

I politely said that I was not interested in your company or services, that I avoid doing business with companies that cold call and cold email, and that I would not answer your questions. You responded with personal attacks, followed by threats that you will keep calling and harassing other employees. Please don’t. You are the bad actor here. You ignored my request for privacy and threatened to harass my coworkers in the future.

Please don’t solicit me or my coworkers again. May this post serve as an additional Do Not Solicit and Opt Out request to you and your employer. Thank you.

IPdeny compiles raw data from regional internet registries and offers free of charge country IP address block downloads. Their country IP zone files can be used to minimize on-line fraud, SPAM, floods, or brute force attacks. This is the source of information my script will use.

About my PowerShell script

This PowerShell script will do the following: * Log you into your Office 365 Exchange environment * Download two .tar.gz files from IPdeny.com (IPv4 and IPv6) * Download a PowerShell function to decompress the .tar.gz files into temporary folders * Loop through each country file and create a new Transport Rule (New-TransportRule) with country-specific IP ranges

You will end up with about 230 IPv4 and 230 IPv6 new Mail Flow Rules. All rules will be Disabled and All rules will be sorted last in priority. My intention is you use this script to Create new rules, but then logon to Office 365 > Exchange admin center > Mail Flow > Rules to Enable and change Priority for the newly-created rules that interest you. Optionally, my script should be easy enough to modify to also automate those tasks as well.

The result in Office 365 > Exchange admin center > Mail Flow > Rules will look like this. Note that I imported only a few IPv4 and IPv6 rules (an option in my script). By default, my script will create about 460 new rules; two for each country (IPv4 and IPv6). 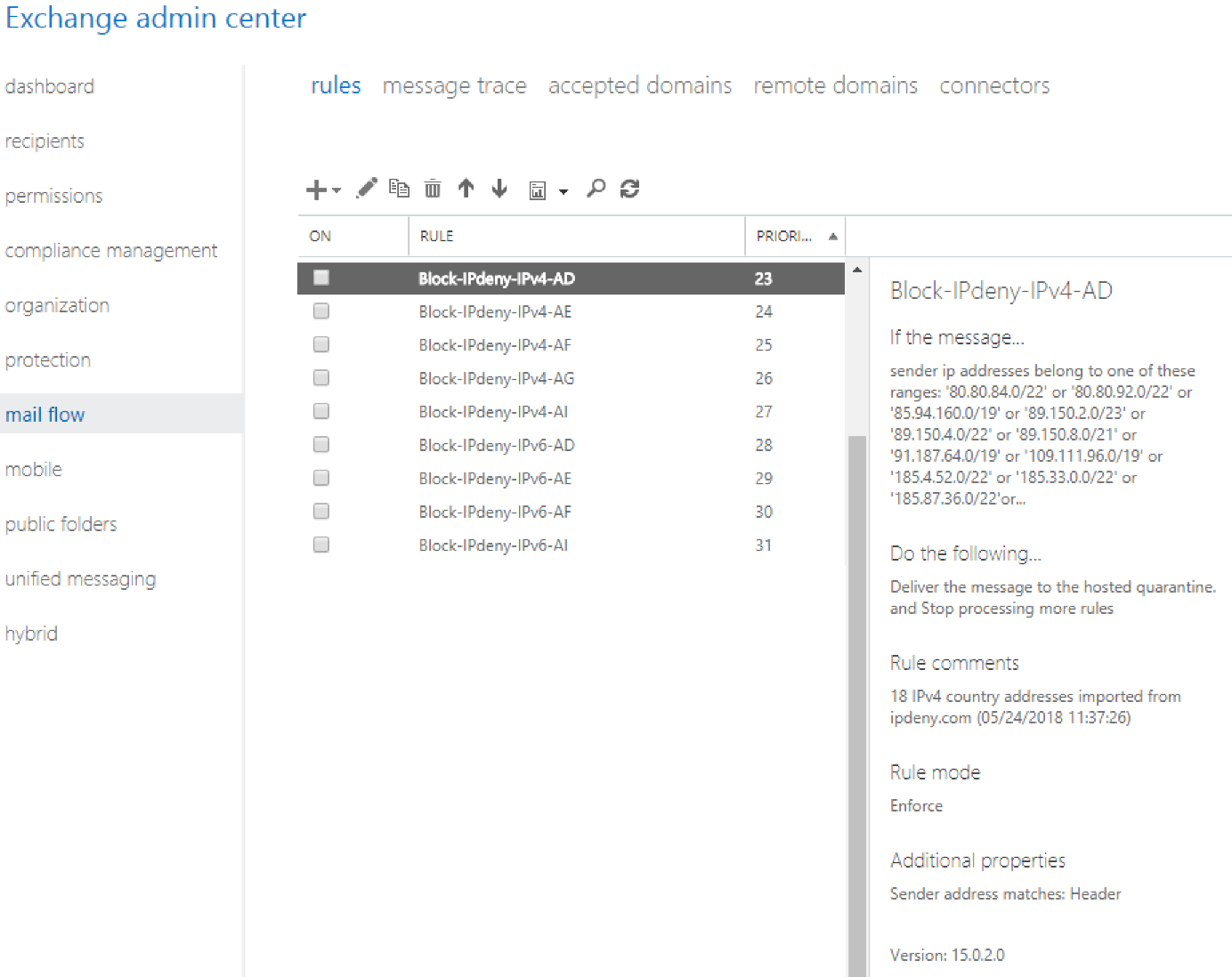 Note that all an Exchange Online admin has to do at this point is to Prioritize and Enable the rules for the countries they wish to block. Each rule is named by the country’s two-character abbreviation and each Rule Comment tells you how many IP blocks were imported and when.

You may re-run this script any time. It will delete existing Rules and create new ones with the updated data from IPdeny.

I hope someone finds this PowerShell script for Office 365 Exchange Online and IPdeny helpful.