My 95-year-old grandmother Sarah Alexander Pearce recently died. She was the genealogist of our family, leaving me big shoes to fill (and lots of research to review). Here are some photos from her funeral as well as her obituary. 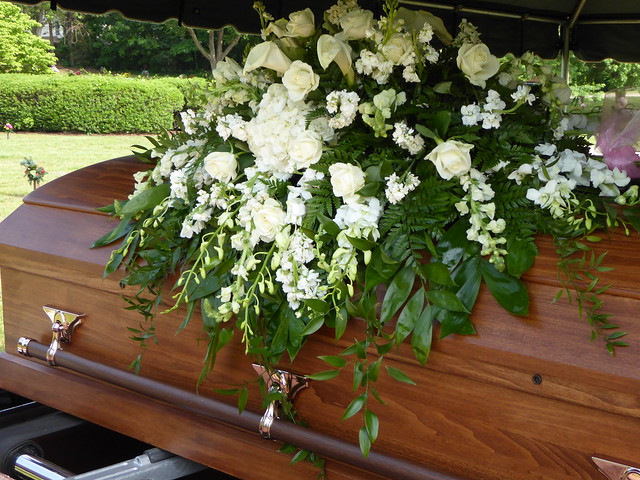 A celebration of her life will be held Thursday, May 14, 2015 at 2 p.m. in the chapel of First Baptist Church, Greensboro, NC. Interment will follow at Westminster Gardens. The family will receive friends at 303 Meadowbrook Terrace from 5 until 7 p.m. following the services.

Sarah was born in Charlotte, NC on August 4, 1919 to Naomi Booe Alexander and Samuel Irvin Alexander. She was predeceased by her parents and her siblings, James Ijames Alexander, Kathryn Alexander Pittman and Mary Alexander Murray Tate.

Sarah graduated from Central High School in Charlotte, and then attended Erskine College in Due West, S.C. before transferring to Muskingum College in Concord, Ohio. After graduation in 1940, she went to the University of North Carolina in Chapel Hill for further study in the field of Education, where she met her future husband “E.P.” only 150 feet from the building where her mother and father had met!

In the fall of 1940, she began her year of teaching at Fayetteville High School, after which she returned to Chapel Hill to teach at the High School in 1941 on a university grant. She and E.P. married on August 28, 1941. She had her first child, Eddie, in 1942 in Chapel Hill. Her second son, Irvin, was born in Boston in 1945 while her husband was stationed there during WWII. After the war, E.P. became the principal at the High School in Sanford, NC where their first daughter, Sarah, was born in 1947. The family moved to Greensboro in 1949, when E.P. became the director of Instructional Services for the Guilford County Schools. He was promoted to Superintendent in 1959, serving in that capacity until his retirement in 1978. Their fourth child, Susan, was born in 1955.

Sarah returned to the field of education in 1963 after devoting herself to motherhood for 21 years. She became a Home/School coordinator for the Guilford County Schools through the federally funded Title I program. In this position, she was the liaison between the schools and the children in need. Through donations, she helped acquire glasses, shoes, and supplies for those who otherwise could not afford them. When the federal program ended, she returned to the classroom, teaching math at Jamestown Middle School until her retirement in 1986.

The family thanks Bland Whitley and Brittney Sigmon for their loving care given to Sarah in her home. Appreciation is also extended to the staff at Camden Place Health and Rehab for the help and attention given to her in the last six months of her life.

On Line condolences may be sent through www.haneslineberryfuneralhomes.com