I recently had a requirement to build a non-persistent VMware View desktop pool that acted as if the linked-clone virtual desktops had static computer names with static IP addresses. The reason was that the vendor of a particular clinical application ties its licensing to both the computer name and its IP address. If they don’t match a predefined table, the client application won’t launch.

By default, VMware View non-persistent (floating) desktop pools rely on DHCP. My first idea was to build a new DHCP scope for this desktop pool that made use of DHCP Reservations (DHCP reservations are permanent lease assignments that are used to ensure that a specified client on a subnet can always use the same IP address).

My problem was that DHCP Reservations work by configuring a specific IP address to a specific MAC address. Unfortunately, non-persistent desktops receive a new MAC address upon rebuild or recompose — which ruled out this option. 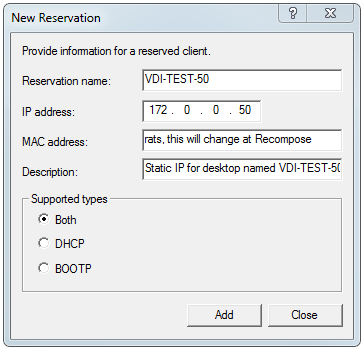 After toying with the idea of using Group Policy Preferences with Item Level Targeting that references the NetBIOS Name, I decided it would be easier just to script the solution.

In VMware vCenter, I gave my parent virtual machine a second vNIC that I’ll use for the static IP and scripting solution. The first vNIC will remain DHCP.

When building a desktop pool in VMware View there is an option to run a Post-Synchronization Script. The solution I ended up going with was to create a script that will change the IP address of the virtual machine after it is built via the NETSH command. The script has to reside on your Parent Virtual Machine.

I created a .BAT file that looks something like this (each IF should begin a new line):

Here is what happens when VMware View builds a new desktop in this pool:

If you have also needed static IP addresses in a floating VMware View linked clone desktop pool but engineered a different solution, I’d like to know.