In December 2010, the Pearce family (Irv, Ann, Cameron, Jason, and Jenny) went to Egypt for a two week vacation. Here’s a brief summary of our trip with links to many photos.

We arrive in Cairo around dinner and get to enjoy the city’s crazy rush-our traffic as we travel from the Cairo International Airport to the Cairo Marriott Hotel & Omar Khayyam Casino, which is a former palace located along the Nile. We were eager to head to bed.

Today was focused on visiting sites in Cairo. We began at the Mosque of Mohammad Ali Pasha, then visited the 100+ year old Egyptian Museum (no photos allowed), and ended the day with a sound and light show at the Pyramids of Giza.

Flying to Luxor, we began the day visiting the Karnak Temple. a UNESCO World Heritage Site. We then boarded our four-story cruise ship and enjoyed dinner. After dinner, we returned to the Karnak temple for a sound and light show that was much better than the one we experienced in Giza.

Still docked in Luxor, we traveled by bus to Dandarah to visit the Dendera Temple. We then returned to Luxor to enjoy the Luxor Temple by both dusk and night.

Still in Luxor, we traveled across the Nile to visit the Valley of the Kings (no photos allowed), were we entered several tombs including Tutankhamun’s. We then visited the Mortuary Temple of Hatshepsut. We even had time to visit the Colossi of Memnon before setting sail again up the Nile and passing through some locks.

We began the day at a granite quarry to see an unfinished obelisk that was not fully carved out of the bedrock. Next up, the High Dam in Aswan that makes Lake Nasser. We then traveled by boat to the Temple of Philae, which is a UNESCO World Heritage Site that was relocated to a higher island after the dam was built. Lastly, we traveled by boat to a Nubian Village that resided on an island in the middle of the Nile.

Got up at 3 am to fly to Aswan to see the amazing Abu Simbel temples, which are a UNESCO World Heritage Site. They, too, were relocated due to the dam. This time, engineers had to move two large hills as the temples were carved right into the stone.

Today was a peaceful day cruising the Nile. We all needed the rest.

It was time to disembark our ship and catch a return flight from Luxor to Cairo.

Our last full day of sightseeing, we awoke in Cairo to take a bus to Saqqarah to see the Statue of Ramesses II. Next up was the Step Pyramid of Djoser, also in Saqqarah. Saving the best for last, we ended our vacation at the the Great Pyramids of Giza; both a UNESCO World Heritage Site and one of the Seven Ancient Wonders of the World.

You might also have fun browsing our photos on a map. My brother and I used cameras that had a built-in GPS receiver, which greatly helped me properly geotag all of our photos. 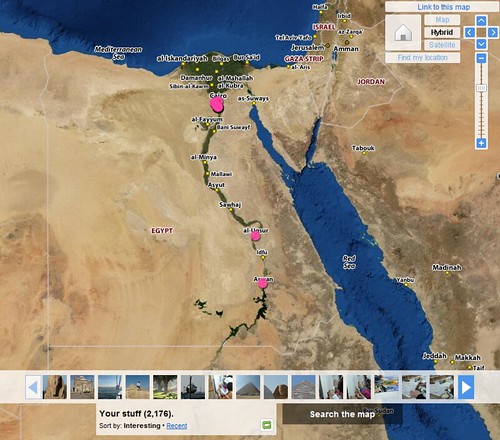 One reply on “Egypt Vacation Summary”