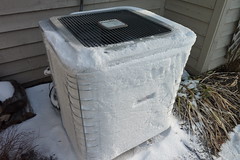 This morning, I stepped outside and noticed that our HVAC unit (or heat pump) appeared to be frozen.

I figured it was a problem since none of my neighbors’ units were surrounded by blocks of ice like ours was. Thankfully, I have a brother-in-law who engineered these things for a living. Here’s what he had to say.

When the heat pump is in heating mode it is moving heat from the outside to the inside. Since heat only flows from a high temperature to a lower temperature, the refrigerant is colder than the air temperature when it is running through the outdoor unit. This causes the moisture in the air to condense and freeze on the coil.

In order to combat this, the unit will periodically go into a defrost mode. This is essentially running the heat pump in cooling mode. So the outdoor coil heats up and the indoor coil cools down. You don’t notice the cold because the electric resistance heat turns on in the indoor unit to offset the cold from the coil.

Usually the unit will have a time and temperature logic for how often it goes into defrost mode. The temperature is typically measured by a sensor that is placed on one of the tubes of the outdoor coil (typically on a bend in the tube that isn’t visible from the outside of the unit). If the temperature is below freezing then a “flag” is triggered. The time portion is a measure of how long the unit has been running since the last defrost. This is typically set by a dip switch on the outdoor unit control board. Typically something like 60, 90, 120, or 150 minutes.

When the unit goes into defrost mode, there is another temperature sensor on the outdoor coil that will turn off the defrost once it reaches something around 80Â°F.

If enough ice has accumulated around the coil that the tubes can reach 80Â°F but there is still a layer around it, then the defrost will not function properly and you could have a situation similar to yours. This would be corrected by lowering the run time setting that I mentioned above, so that the unit defrosts more often.

The other issues could be that the defrost sensor is not functioning properly and the unit is not defrosting at all.

In order to correct the situation, I would turn off the unit and start dumping water on it until you get all of the ice off. This will be a pain in the butt. You could use a hose too if you have a water supply nearby. Once the ice is off, turn back on the unit. You should be able to hear it go into defrost from inside your living room. It sounds like a clunk and hissing. If it is doing that, then you might need to adjust your time setting. If it runs for like 3 hours straight without that, then you may have a bad defrost temperature sensor.

It took me a little over two hours to get most of the ice off of it. The ice you see on the outside of the unit was just as bad on the inside of the unit. This time it turned on for just a few minutes before turning off again — instead of running for days straight.