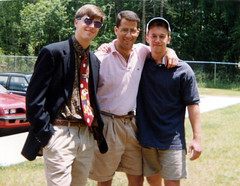 This weekend I’m heading back to my alma mater Elon University to see two of my college roommates, one of whom is serving as the university’s 2008 commencement speaker.

Pictured here is me, Doug Finberg, and Brad Phillips. The three of use lived in a three-bedroom apartment just a few blocks off campus for two years. We were all founding members of Lambda Chi Alpha fraternity and made the most of our undergraduate years (both academically and socially).

In the 14 years that have passed, I’ve spent most of my time working for non-profits or small companies doing information technology and web development work. Brad has spent most of his career as a skilled video editor and post production guru. While Doug has steadily climbed the marketing ladder in the big business of movie production.

Here’s an excerpt of what Elon has to say about him.

Douglas Finberg, senior vice president of international marketing for Paramount Pictures and a 1994 Elon alumnus, will deliver Elon’s 2008 commencement address. Finberg was named senior vice president of Paramount in 2006. He acts as a liaison for filmmakers, studio executives and producers in Los Angeles, in addition to producing marketing campaigns for international theatrical releases. Before arriving at Paramount, Finberg spent 10 years as a creative executive in international marketing and advertising for DreamWorks SKG. He received the 2001 Hollywood Reporter Key Art Award for best international comedy trailer for “Meet the Parents.”

Commencement is scheduled for 9:30 a.m. Saturday, May 24, Under the Oaks in front of West Residence Hall. It’s been nearly 10 years since I’ve seen either Doug or Brad, so I’m looking forward to catching up with them this weekend.